It all began in January with the Putney Painters' week at the Scottsdale Artists’ School and exhibit at The Legacy Gallery.  Since then my show attendance and collecting have escalated.  After I won the silent auction dual painting by Kathy Anderson and Stephanie Birdsall , Stephanie invited me to for pot luck before the Settler’s West Gallery annual miniature show in February.
I arrived and unacquainted with most of Stephanie’s artist guests switched into artist-speak for some intense hob nobbing. I met many brand new seemingly “old friends”, among them Tim Newton of the Salmagundi Club, Albert Handell with his signature tomato soup colored suspenders and Stephen C. Datz, stellar landscape artist from .  Chatting it up with Anita Mosher and Carol Swinney I realized I need to be with artists to fuel my energy and passion. Back at my hotel I felt like a “born again artist”.
The 30th annual Settler’s West Gallery miniature show was a big hit. Gallery director Stuart Johnson indicated it’s the gallery’s most successful show.  This year 322 pieces from 220 artists were exhibited.  I tried to resist slipping my name into the little white numbered boxes but to no avail. My name was announced for my two favorite paintings. !
Next up was last Thursday's opening reception at the Legacy Gallery for Robert Coombs, who was our first grand prize winner in 2005.  I also met with Kate Sammons who encouraged me to set up my studio, Romel De La Torre, who was a contest finalist numerous times and Mary Qian, the OPA top prize winner in 2010, who planned a career in animation but changed to fine art.  We’re glad she did.
General Manager Scott Jones is thrilled with the entries for Legacy’s 2nd Annual Salon in April.  It will be preceded by their auction on March 31st.  It will be my first auction and I look forward to viewing originals by Charles Russell, Howard Terpning and Oscar Berninghaus.
RayMar has some upcoming shows too:  The 1st Annual Plein Air Convention in in April where we have been designated The Official Panel of the Convention and our third Weekend with the Masters, this year in  in September.
We look forward to meeting you, viewing your wonderful work and discovering the supplies you want us to create to enhance your painting experience. 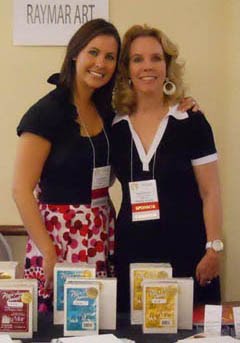 Emily and Catherine Dietrich, the proud owners of RayMar Art!

Where to Find RayMar